WTF? NFTs: The real cost of owning a tweet.

You might have heard talk lately of tweets selling for millions of dollars, or digital art auctions – but how can one own a piece of the internet? Enter NFTs. George, Community Manager at Puzzle, has the low-down on the real impact of this new way to buy and sell art online.

If you haven’t heard of NFTs yet, then good for you – you probably haven’t been spending a lot of time online. A Non-Fungible Token (“nifty” if you’re nasty) is a unit of data stored on a digital ledger, called a blockchain, which can be used to represent a photo, audio, video – even a tweet. And they’ve exploded online in a big way.

Essentially, an NFT is a way of certifying that a digital asset is completely unique and cannot be replaced or equated with something else. Think of it like this: if you have a quid, it’s fungible because you could swap it for two 50ps or five 20ps and still have the same amount. A drawing by my niece, though, would be non-fungible – because it’s irreplaceable (aww).

All this confusing tech translates into netizens being able to “own” a digital file. Chris Crocker, for example, recently sold his infamous Leave Britney Alone video for the equivalent of a whopping $44,000 (in Ethereum – but we’ll get to that). The buyer, however, will not receive so much as a DVD of the iconic footage – instead, they get a “token” that proves their ownership of the original work.

It makes sense that the Mona Lisa, for example, would be non-fungible… But what’s to stop someone from copying an easily-duplicatable digital file?

Theoretically, nothing. Grimes recently sold several pieces of digital art in an online auction, raising a total of $6m – but of course still owns the original files, the copyright and intellectual property. Sure, the buyer has a bit of data saying it belongs to them, but if Grimes wanted to reproduce the artwork, alter the original files or even sell prints of the same piece then most sources say that’s absolutely fine. If I wanted to add a picture of it to the blog, there would be nothing stopping me. Like this:

Image: a digital artwork by Grimes, an NFT of which was recently sold in an online auction among other works raising nearly $6m.

In fact, Twinci, the “first NFTs Social-Marketplace” have recently come under fire for posting artwork for sale (as an NFT) without the artist’s permission. Legally they appear to be in the clear – since they’re selling a token of the work and not the work itself – but it’s still a kick in the teeth to upcoming artists who make most of their profit online.

To summarise, people are paying millions of dollars for the equivalent of teens writing “bestie owns <3” in the caption of their Facebook profile picture.

Remember Nyan Cat? In February of 2021, Nyan Cat brought new meaning to the term “meme economy” when its creator, Chris Torres, sold it as an NFT for 300ETH. ETH stands for Ethereum, aka the cryptocurrency most often used to buy and sell NFTs. At the time of sale, 300ETH was worth around $590k – writing this blog less than two months later, its value has climbed to a staggering $623,510.98. 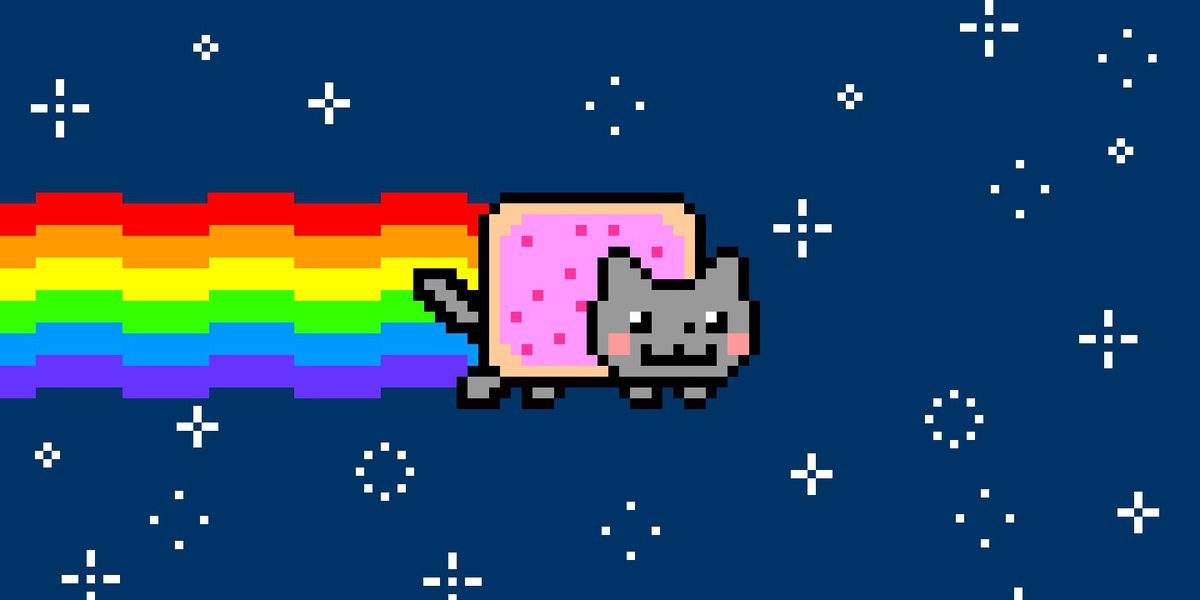 Image: Nyancat, a grey cat with a Pop-Tart for a body that flies along on a rainbow.

Ok, great. So NFTs are profitable and you want in – how do you get hold of the Ethereum needed to buy one?

In the same way that physical currency can be backed by silver or gold, cryptocurrency is mined by computers performing calculations to complete “blocks” of verified transactions, which is done by solving unique and complex puzzles. If it sounds confusing and ridiculous, that’s because it is a bit.

These “rigs” can be made up of huge walls of computers – and mining even 1ETH takes an immense amount of energy. It’s estimated that a single Ethereum transaction costs an amount of energy equivalent to what the average American household uses in 2 and a half days. Image: a Bitcoin mining rig made up of tens of computers. source: news.bitcoin.com

I see the value of cryptocurrency – truly, I do. In a world where our every online transaction is tracked and used to predict our future spending patterns and fraud and identity theft are rife, it makes sense that buyers would want to take control of their online transactions. Wanting a discreet, peer-to-peer currency that doesn’t link transactions to their identity or require dealing with an intermediary authority like a bank or, y’know, the government, is understandable. I get it. But surely the need for crypto is a failure of capitalism, invasive marketing techniques and predatory banks – and doesn’t call for us to fuck the planet even further.

While the dark web is well-known for all the horrible things that happen on it, there are legitimate and understandable uses – from whistleblowing without fear of reprisal to purchasing necessary medicine rendered inaccessible by its cost. As my good friend Mary said in a conversation we had about NFTs – ethics and legality of your online activities aside, you can’t very well use your debit card to buy a gun off the internet. Enter cryptocurrency.

I think what it comes down to is this: I don’t like cryptocurrency in the same way i don’t like Marmite peanut butter. I don’t necessarily blame the people who have legitimate reasons for engaging with it, I just don’t think it should exist in the first place – and I definitely don’t think it should be used to make millionaires richer. We can and should be looking towards more sustainable ways to reclaim our privacy.